You heard right. It’s an unexpected combination, yet it somehow works so perfectly: Blink-182 and Lil Wayne are headed out on tour together this year with special support from Neck Deep. This amazing lineup is headed to the Veterans United Home Loans Amphitheater on Saturday 20th July 2019 – be there!! Tickets on sale now and about to fly off the shelves – grab ‘em while they last!! Remember, no service fees or shipping charges for all purchases made direct on this website. 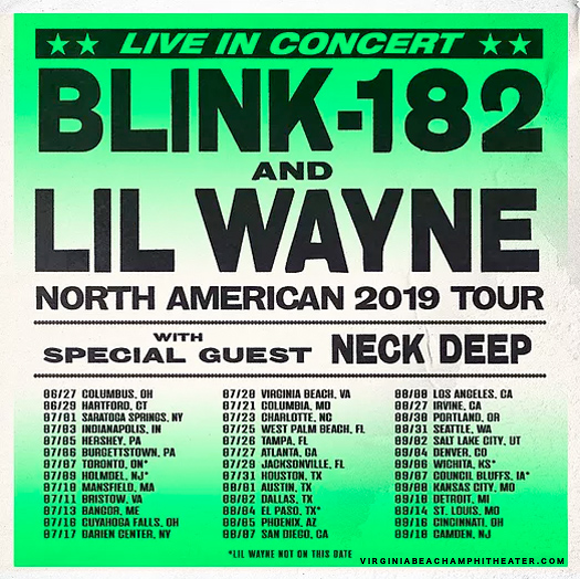 Blink-182 have announced their new album with the single “Blame It On My Youth,” with their new album said to be heavier than their previous. “It’s a lot more aggressive,” said Mark Hoppus in a press release. “It’s darker in theme and tone. If you like California to Enema Of The State then this album is more like the untitled record where we are trying to experiment more: trying to experiment more, trying different sounds, and trying to expand upon what people think Blink-182 is.”

As for Lil Wayne, he’d stated last year that his phenomenal chart-topping album “Tha Carter V” would be his last, as he took time away from the limelight to focus on fatherhood and family. However, it looks as if the rapper just couldn’t stop with the creativity, as just a year on and he already has another offering for fans, scheduled for release ahead of the tour. Fans are hyped!!

What are you waiting for?? Those tickets won’t last – be quick and get them while you can!