Brad Paisley brings his extended World Tour to Veterans United Home Loans Amphitheater on Friday 12th June 2020! Things have been quiet in terms of new music from the star over the past few years (his last release being 2017's Love & War, which featured collaborations with Timbaland, John Fogerty, Bill Anderson, and Mick Jagger), but there are rumors of a new album in the works, so get excited fans! Also, Paisley has one of the richest back catalogs of any country act, and he always delivers the goods, so whatever the set-list, you know it's gonna be one helluva show! He's also picked an incredible support line-up, with Jordan Davis & Gabby Barrett in support! 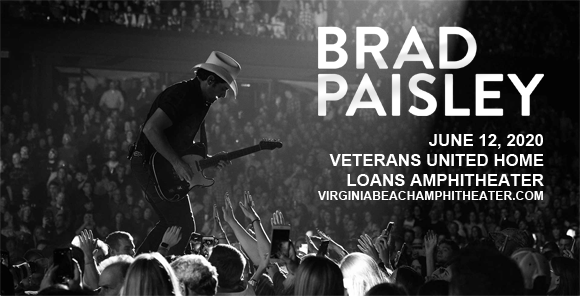 One of country's most consistently popular acts, Brad Paisley is a bonafide megastar, whose career began in 1995, when he signed his first music contract with EMI Publishing just one week after graduating from Belmont University. Paisley's introduction into the world of country music was as a songwriter for a variety of other artists, but four years after signing with EMI, he signed to Arista as a solo artist. This changed the game for the singer, who released his debut album, Who Needs Pictures, later that year, selling over one million copies in the US and launching four top twenty singles (two of which went to number one). That was the start of a winning streak for the performer, whose eleven subsequent albums all achieved gold status or higher. Paisley also holds the record for the most consecutive number-one singles on the Billboard Hot Country Songs chart, with ten, and has charted thirty two top ten singles on the chart throughout his career, including eighteen number ones. He has been honored with three Grammy Awards, fourteen Academy of Country Music Awards, fourteen Country Music Association Awards, and two American Music Awards, and was both the youngest inductee into the Jamboree USA Hall of Fame and the youngest ever member of the Grand Ole Opry.