Huge and exciting news as the talented Dave Matthews Band have announced they will be heading back out on the road for 2021 on their Summer tour! Fans can now grab the opportunity as it arises and book tickets for their exclusive dates! Don't miss Dave Matthews Band as they grace the stage at Veterans United Home Loans Amphitheater on Saturday 28th August 2021 (Rescheduled from Saturday 24th July 2021) – tickets are NOW on sale! 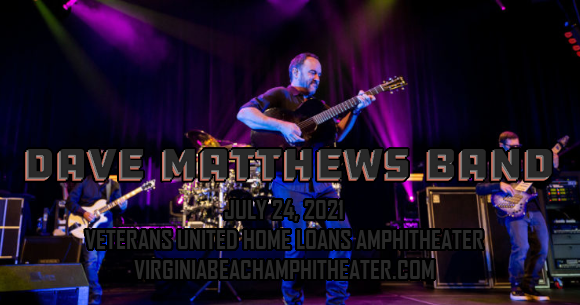 With their long list of music releases and sold out tours around the globe, Dave Matthews Band have grabbed the spotlight and stayed at the top of their game throughout the decades. Their music has become a well deserved sensation as they have given fans plenty of material to listen and fall in love with over the years, ever since they first came onto the scene back in 1994.

For the past 25 years and counting, Dave Matthews Band have showcased the perfect ability of keeping things changeable and varied but always staying true to their original roots and sound! An accomplishment that so many long-term bands try to succeed in, DMB are absolute pros at it.

Dave Matthews Band's members are of course; Dave Matthews on vocals and guitar, Stefan Lessard on Bass, Carter Beauford on drums and more exceptional musicians have joined them on their journey throughout time. With their pure creative talents, DMB have showcased that they have what it takes to be legendary, through their eight incredible studio albums and plenty of chart topping singles. Under the Table and Dreaming, hit the ball rolling for their long standing international success and DMB carried on to produce; Crash (1996), Before These Crowded Streets (1998), Everyday (2001), Busted Stuff (2002), Stand Up (2005), Big Whiskey & the GrooGrux King (2009), Away from the World (2012) and their newest album – Come Tomorrow (2018).

As well as their records, DMB have combated the live music scene, with their flawless concerts. As they travel across the world to bring their greatest and most loved songs to the stage, DMB have developed a unique way of working and ensure that each and every one of their performances are different from the next, with mind blowing improvisation and varied versions of their hit songs!

If you love Dave Matthews Band, and really who doesn't?! Then be sure to grab your tickets as they play across North America this coming Summer season!