Country fans, are you hyped for this EPIC show?? That’s right, Dierks Bentley is hitting the road again in 2019 with the Burning Man Tour, with special support from Jon Pardi and Tenille Townes!! They’re headed to the Veterans United Home Loans Amphitheater on Friday 12th July 2019 for a country music extravaganza that no fan is going to want to miss it!! Make sure that’s not you – book your space at the show by hitting the “Buy Tickets,” button above NOW!! 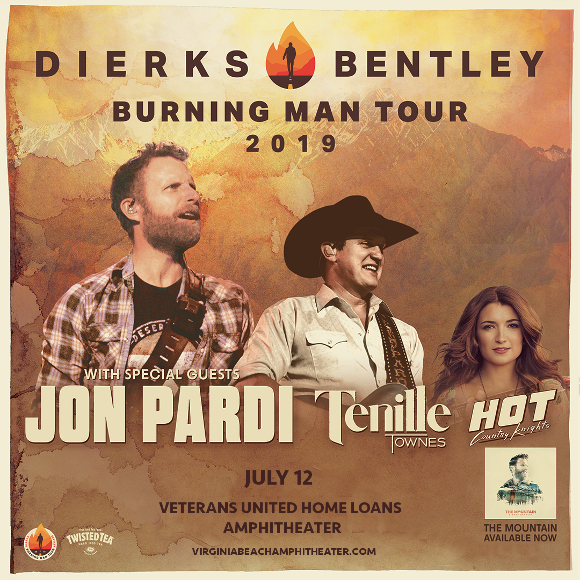 He’s barely just come off the road from promoting “The Mountain,” but the tireless Dierks Bentley is already returning to his fans after barely a few weeks rest. “What’s special about this tour is who’s going out with us,” was what Dierks Bentley had to say, when asked how the new tour would differ from last year’s promo tour for his latest album. “Jon Pardi is back out on the road with us and Tenille Townes. I don’t want to throw the baby out with the bathwater; there are some really great parts of the show that I hate to change up. For those fans, it’s a chance to see a tour that’s extremely, on our end at least, super dialed in. This thing is so fun.”

We’re super excited to see it all live – are you?? Make sure you don’t miss it, especially if you didn’t get the chance to catch Dierks Bentley last year. But hurry – if that tour was anything to go by, tickets will sell out quick!!