It's time for a classic rock extravaganza as Foreigner comes to Veterans United Home Loans Amphitheater on Wednesday 26th August 2020 with Kansas and Europe in tow! Year after year, Foreigner continue to thrill fans with their hugely entertaining shows that have earned them the reputation of being one of the most consistently entertaining touring rock bands in the business, and this year it makes complete sense that they would bring two fellow multi-platinum-selling rock groups with them! Get ready for a night of hits that dominated the airwaves throughout the 1970s and '80s! 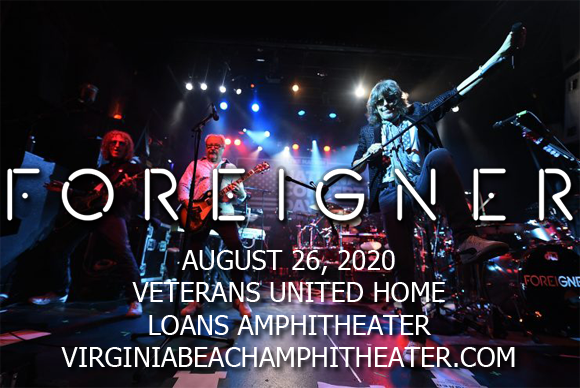 One of the most successful rock acts of the 1970s and '80s, Foreigner was formed in 1976, and was so named because its members were based in both the UK and the US. The group was originally formed by ex–Spooky Tooth member Mick Jones, ex–King Crimson member Ian McDonald, and American vocalist Lou Gramm. With worldwide sales of more than 80 million records (including 37.5 million records in the US ), Foreigner is now one of the world's best-selling bands of all time. Their self-titled 1977 debut album was an instant hit, launching the singles "Feels Like the First Time", "Cold as Ice" and "Long, Long Way from Home", and setting a precedent for albums to come. The band's biggest hit is the 1984 single "I Want to Know What Love Is", which topped charts all over the globe, including in the United Kingdom and United States. Their 1981 power ballad "Waiting for a Girl Like You" did similarly well, peaking at number two on the US chart for a record-setting 10 weeks. Over the years, the band has experienced a number of line-up changes, but all of Foreigner's original surviving members have taken to the stage with the current iteration at various times.