Are you missing Game of Thrones already? Well, fans of the Emmy Award-winning show are in luck as Game of Thrones Live Concert Experience comes to Veterans United Home Loans Amphitheater on Tuesday 17th September 2019, bringing Ramin Djawadi's famous score to the stage! Enjoy a symphony concert of all the best musical pieces from the show's eight seasons in this immersive show! 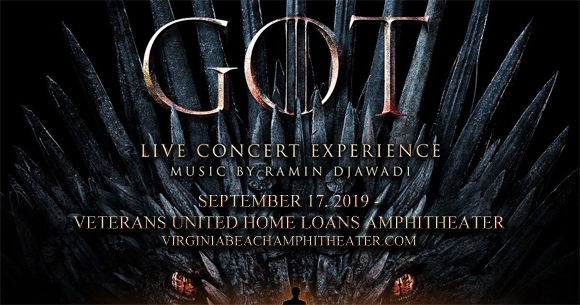 Now in its third year, the Game of Thrones Live Concert Series takes Ramin Djawadi's iconic score to HBO's epic fantasy series and brings it to life on stage in this immersive and sensational concert experience. Djawadi, whose credits also include the Grammy®-nominated score for Marvel's Iron Man (2008), as well as Pacific Rim, Clash Of The Titans, Warcraft, Westworld, Flash Forward and Prison Break, will be joined by a choir and symphony orchestra, and will perform specially curated arrangements of his recognisable score, including new additions such as the Night King's Theme. The atmospheric soundtrack will be enhanced by top-notch audio-visual effects and projections, making this a captivating show that perfectly evokes the spirit of Westeros.