Some acts just stand the test of time, and none more so than Hall and Oates, whose groove-filled tunes are still radio staples some three or four decades since their release! The Philadelphia twosome remain an essential act on the touring circuit, with their shows selling out night after night! This year, they're bringing their hit-filled tour to Veterans United Home Loans Amphitheater on Thursday 20th August 2020, and they'll be performing a set of classic Hall and Oates tunes, plus they'll have support from KT Tunstall & Squeeze! 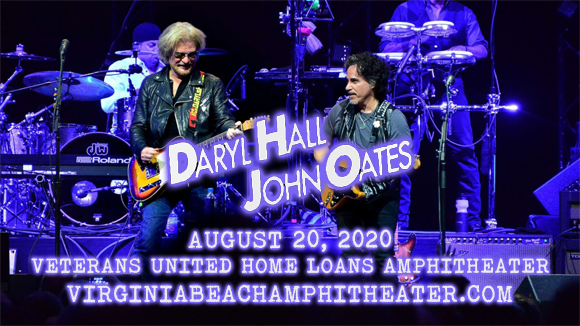 Though not always given the credit they deserve, few duos have had the cultural impact and musical legacy of Hall and Oates. Their ability to stay true to their Philadelphia soul roots whilst simultaneously creating genre-crossing radio-friendly mainstream hits (like number one singles “Rich Girl”, "Kiss on My List", "Private Eyes", "I Can't Go for That (No Can Do)", "Maneater", and "Out of Touch") is something that few acts have managed and is undoubtedly what has made them the best-selling muscial duo of all time (selling over 40 million albums worldwide). A popular and prolific pair, throughout their career, they have charted a total of 34 hits on the Billboard Hot 100, and seven of their albums have been certified platinum, with six of them certified gold. Their musical achievements have been recognized with induction into the Songwriters and Rock and Rock Halls of Fame, and a star on the Hollywood Walk of Fame.