The inordinately talented blues guitarist Joe Bonamassa comes to Veterans United Home Loans Amphitheater on Thursday 1st August 2019 promoting the release of his most recent album, Redemption! The virtuoso performer is a thrill to see live, commanding complete attention from the crowd with his insane skill as one of the world's best and most distinguished players! Simply unmissable! 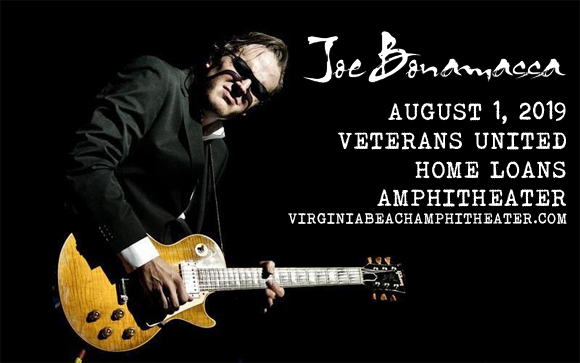 A child prodigy that grew up to be considered one of the world's greatest guitar players, American blues rock guitarist, singer and songwriter Joe Bonamassa began playing at just four years old. Eight years later, at the age of twelve, he formed his own band, Smokin' Joe Bonamassa, and began gigging at the weekends around New York and Western Pennsylvania, landing himself a twenty-date support slot for blues legend BB King. He then went on to form the band Bloodlines with the sons of Miles Davis, Robby Krieger, and Berry Oakley, performing with them through his later teenage years. Bonamassa made his solo debut in 2000 with the release of his first studio album, A New Day Yesterday, which reached number nine on the Billboard Blues Chart. Three number one albums on the Billboard Blues Chart followed, and all five of his solo studio albums have made the top ten. He received his first Grammy Award Nomination for 2013's See Saw, which is a collaborative album with singer Beth Hart. Bonamassa has released fifteen solo albums through his independent record label J&R Adventures, eleven of which have reached number one on the Billboard Blues charts. He has performed and collaborated with a number of highly influential and well-respected artists over the years, including Stephen Stills, Eric Clapton, Blondie Chaplin, Foreigner, Buddy Guy, Steve Winwood, Warren Haynes, and Derek Trucks among others.