Six years after their unforgettable collaboration on "Wagon Wheel," Lady Antebellum and Darius Rucker are teaming up for a country-lover's dream tour! The Summer Plays On Tour comes to Veterans United Home Loans Amphitheater on Thursday 20th September 2018 and sees two headlining sets from these incredible acts, as well as support from up-and-comer Russell Dickerson! 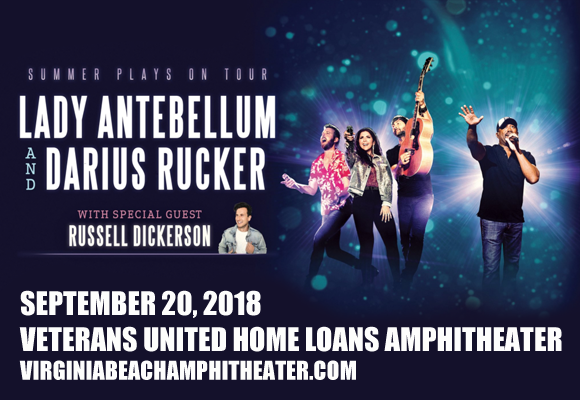 Formed in Nashville, Tennessee in 2006, and consisting of Hillary Scott (lead and background vocals), Charles Kelley (lead and background vocals, guitar), and Dave Haywood(background vocals, guitar, piano, mandolin), Lady Antebellum is an American country music group. The band made their debut in 2007 when they featured as vocalists on Jim Brickman's single "Never Alone," and they signed with Capitol Nashville later that year. The band have recorded six studio albums to date, and their eponymous debut album and two subsequent follow-ups are certified platinum or higher by the Recording Industry Association of America (RIAA). Lady Antebellum has charted sixteen singles on the Hot Country Songs and Country Airplay charts, including nine number ones.