After a year-long hiatus, the fantastic Lady Antebellum are back! With new songs, a new sound and a brand new show, the trio bring their You Look Good Tour to Veterans United Home Loans Amphitheater on Saturday 17th June 2017! The Grammy-winning sensations will be joined on their stint on the road by rising star Kelsea Ballerini & exciting newcomer on the scene Brett Young! Catch these chart-toppers LIVE! 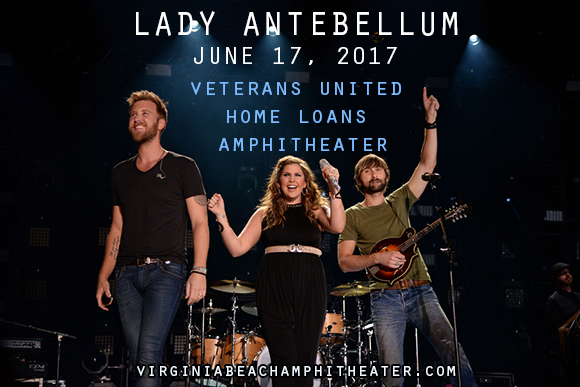 Hillary Scott (lead vocals), Charles Kelley (lead vocals) and Dave Haywood (background vocals, guitar, piano, mandolin) are Lady Antebellum! The sensational country trio started in Nashville in 2006, and signed to Capitol Nashville the following year, finding success with an appearance on Jim Brickman’s single “Never Alone”. Since then, they've topped the charts with hits like "I Run To You" "American Honey" "Looking For A Good Time" "Hello World" and "Need You Now", which lead to the band winning five awards at the 53rd Grammy Awards, including Song of the Year and Record of the Year.