“Queen of Hip of Hip Hop Soul” Mary J. Blige comes to Veterans United Home Loans Amphitheater on Saturday 12th August 2017 as part of her Strength of a Woman Tour! The "Thick of It" singer will be performing songs from her fresh new album, which features Kanye West, Missy Elliott, Quavo, DJ Khaled, Kaytranada and Prince Charlez, as well as some fan favorites! Don't miss this legend live1 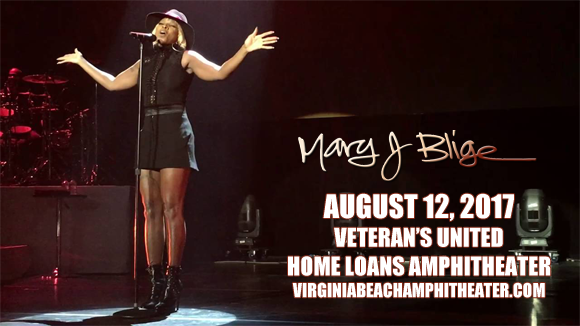 American R&B singer, songwriter, model, record producer and actress Mary J. Blige began her career in 1989 as a backing singer for Uptown Records. Her debut album, What's The 411?, was released in 1992 and to date Blige has released 13 studio albums and made over 150 guest appearances on other albums and soundtracks. Known as the Queen of Hiphop Soul, Blige has eight multi-platinum albums to her name and her 1994 album My Life is considered among the greatest albums ever recorded according to Rolling Stone, Time, and Vibe. Nominated for 30 Grammy Awards and a recipient of 9, Blige was ranked by Billboard as the most successful female R&B artist of the past 25 years. She has sold more than 50 million albums and 25 million singles worldwide.