Bringing the hottest hip hop to 24 cities across North America this summer, with a fresh to death line-up, the Legendary Nights Tour comes to Veterans United Home Loans Amphitheater on Friday 20th September 2019! The tour sees superstar rappers Meek Mill and Future teaming up to co-headline, as well as support from Mustard, YG and Megan Thee Stallion! Not only will fans get to enjoy sets from some of the sickest emcees out there, but they'll be treated to brand new tracks, with each of these artists having released new material in the last year! 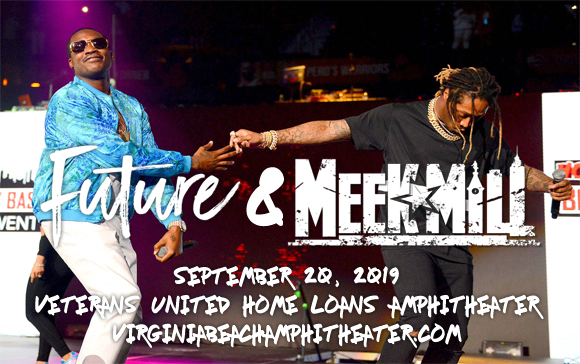 The Legendary Nights Tour brings together rap powerhouses Meek Mill and Future for a co-headliner, as well as a fire line-up of special guests including YG, Mustard, and Megan Thee Stallion.

Mill began his rap journey as a teen battle rapper in Philedelphia, and made waves on the scene in 2008 with the release of his fourth mixtape, Flamers 2: Hottest In Tha City. Since signing with Rick Ross's Maybach Music Group (MMG), Mill has continued to prove himself as one of the dopest rappers around. His latest album, Championships, was released last year and debuted at number one on the Billboard 200.

Future started out in Atlanta as part of the legendary Dungeon Family, alongside Outkast and Cee-lo Green. After signing with Epic Records in 2012, he quickly established his name as one to watch. His 2017 releases Future and Hndrxx made him the first ever artist to debut two albums in consecutive weeks at the top of Billboard 200.