The biggest Metal announcement of 2020 is here! Megadeth & Lamb of God are heading out across North America on their intense 2020 co-headline tour! Two of the most legendary bands of Thrash Metal will be taking centre stage to give their fans an out of this world night of music! You can now book your tickets for Veterans United Home Loans Amphitheater on Tuesday 16th June 2020 – here's your chance to catch both Megadeth & Lamb of God in one place – don't miss out! 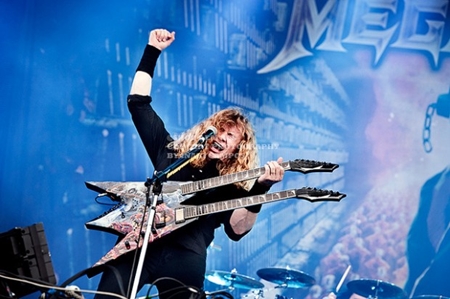 As one of the most successful bands in Metal, Megadeth have blown everyone away with their long standing career since the mid 1980s. With their debut album they rocketed to the top of their game with Killing Is My Business… and Business Is Good! And haven't looked back ever since. With their full power unstoppable tours and plenty of continuous releases, Megadeth transformed the genre and exceeded all expectations as they brought to our ears their first label backed album, Peace Sells… but Who's Buying?

Megadeth continued to triumph with the three albums that really made them including Rust in Peace (1990) and Countdown to Extinction (1992) which both escalated to a platinum selling status and pushed them into the spotlight. With their worldwide following and recognition and respect throughout, Megadeth have become an iconic band and are still showcasing what they do best as they keep on with their high energy performances!

Lamb of God have remained to be one of the biggest names in Metal since their early days all the way back in 1994 up until today. With their career spanning over the last 25 years, LoG have given us some incredible releases from their nine studio records which have grabbed them impressive sales of over two million in the US alone! With their highly raved about career, Lamb of God have been a significant band, known best for their mark on the New Wave movement of American Heavy Metal during the 1990s – 2000s.

Together they have stormed the world performing at some of the biggest festivals in the world including Ozzfest twice. Download Festival and Sonisphere Festival in the UK, Soundwave Festival, Mayhem Festival 2010 and Gigantour.

Get ready to catch both of these unmissable bands as they take to the stage this coming Summer! What an opportunity – grab it by the horns and book your tickets today!