Rock's finest hour will come upon us as some of the great rock titans of our time are due to deliver earth-shaking rock music as they hit the Veterans United Home Loans Amphitheater stage on Saturday 20th June 2020. Canadian rock band Nickelback is on its headlining tour that marks the 15th anniversary of its diamond-certified No. 1 album "All The Right Reasons". And with Stone Temple Pilots & Tyler Bryant, this rock concert definitely covers the whole nine yards. A penultimate rock show experience every rock fan should not dare miss! Hurry, click that 'get tickets' link to book your tickets now! 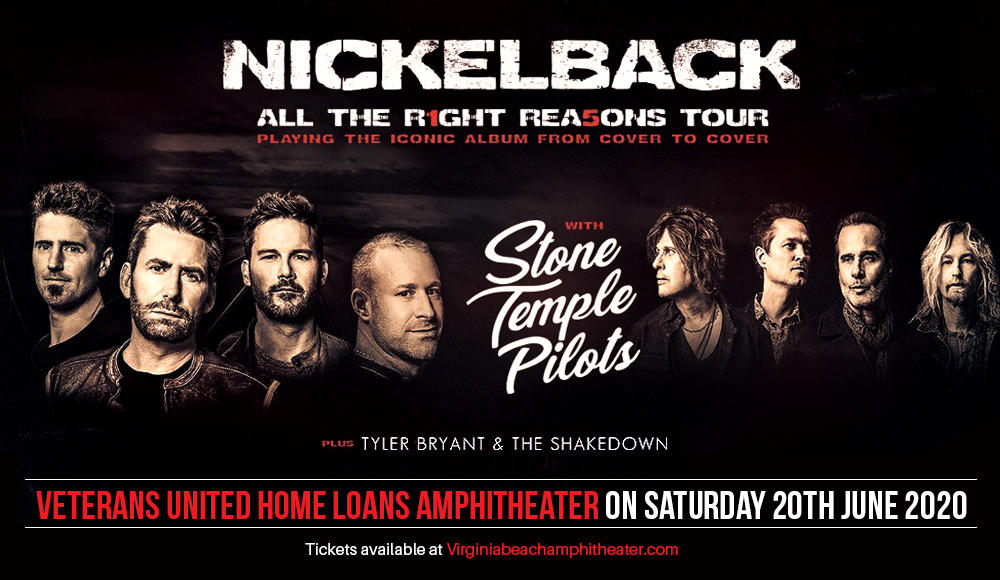 "All the Right Reasons" — one of the pivotal reasons why Nickelback is one of the most influential rock bands of the modern rock era. The album debuted in Oct. 4, 2005, and spawned an astounding seven radio singles, five of which were Top 20 Hot 100 singles including “Photograph,” “Rockstar,” “Far Away,” “If Everyone Cared,” and “Savin’ Me”, giving the album a Diamond certification.

Upon the release of "All The Right Reasons", it debuted at No. 1 on the U.S. Billboard 200 chart, in a heartbeat. It perched on the Top 30 of the U.S. Billboard 200 chart for a whopping 110 weeks and was certified multiple gold and multi-platinum around the world. With over 19 million copies sold worldwide, the iconic record is one of the best-selling albums in North America. And if those were not enough, the single "How You Remind Me" was named Billboard's "Top Rock Song Of The Decade".

The album also solidified Nickelback's reputation as an acclaimed artist by bagging numerous institutional awards and citations. Billboard named them "Top Rock Group of the Decade." And, along the way, they have received a staggering nine Grammy Award nominations, three American Music Awards, a World Music Award, a People's Choice Award, twelve JUNO Awards, seven MuchMusic Video Awards, and have been inducted into Canada's Walk Of Fame in 2007.

Nickelback's "All the Right Reasons" turns 15 this year and the music still resonates and influences many-a-rock aspirants and fans from all over the world. Now that is indeed one big reason to celebrate. NICKELBACK is set to hit the road this summer, bringing some of its biggest hits to venues across North America on the band's 2020 headlining tour. NICKELBACK will celebrate the 15th anniversary of its diamond-certified No. 1 album "All The Right Reasons" by performing the album in its entirety, in addition to a slew of hits fans know and love.

All the right reasons to waste no time in getting those hot tickets in your hands! What are you waiting for? Get your tickets now!