Bringing fresh flavor and a whole heap of harmonious talent to some of music's biggest pop hits, a capella five-piece Pentatonix are headed to Veterans United Home Loans Amphitheater on Sunday 5th August 2018 as part of their 2018 world tour! The Grammy Award-winning vocalists will be performing tracks from their hot new album PTX Presents: Top Pop, Vol. I at this electrifying and unmissable live show! 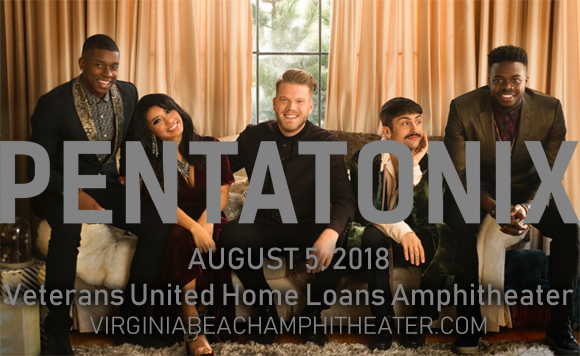 Formed in 2011, before entering and subsequently winning the NBC talent competition The Sing-Off, Pentatonix is an American a cappella vocal group consisting of vocalists Scott Hoying, Mitch Grassi, Kirstin Maldonado, Kevin Olusola and Matt Sallee. The band went on to win season three of The Sing-Off, taking home $200,000 and a recording contract with Sony Music's Epic Records. After the band was dropped from Epic Records they began a YouTube channel, showcasing their songs, covers and vocal arrangements, which is now the 50th most-subscribed-to YouTube channel, with over 13 million subscribers and 2.7 billion views. Over the years, the band has released several EPs, Christmas records and studio albums, and they have been awarded three Grammy Awards to date. Pentatonix's latest studio album, PTX Presents: Top Pop, Vol. I, is released on April 13 2018.