Country fans, get ready to welcome your favorite trio to Virginia Beach! The rumors have been confirmed: Rascal Flatts are on tour once again in 2019, and they’re headed to the Veterans United Home Loans Amphitheater on Saturday 29th June 2019! Tickets are on sale now and disappearing FAST – get yours while they last! Remember, there are no service charges or shipping fees for any tickets bought directly from this website! 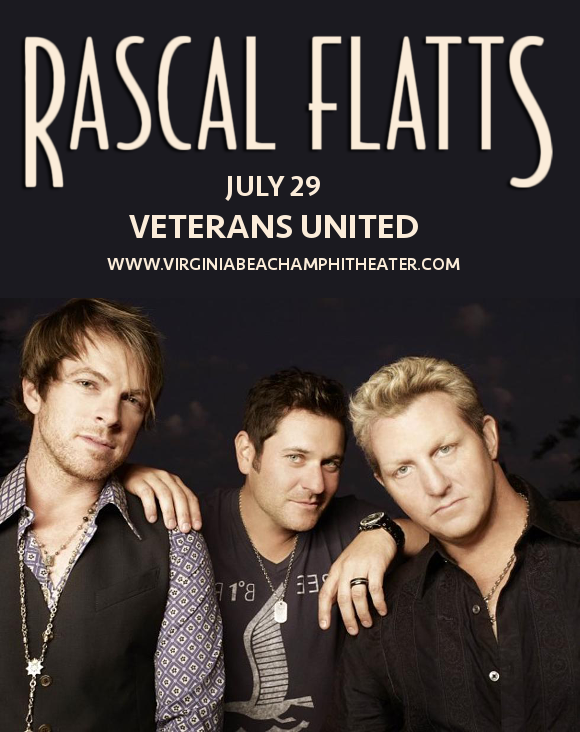 Formed of Gary LeVox, Jay DeMarcus, and Joe Don Rooney, Rascal Flatts took the country world by storm with their self-titled debut album. With its four singles all appearing on the Billboard country charts, the trio really struck a chord with the country community, who latched onto the band for their incredibly catchy hooks and uplifting harmonies.

After some experimentation, the band have ultimately returned to the sound that got them fans. The new record, entitled “Back To Us,” contains just about everything that’s good about Rascal Flatts. ”The three of us couldn’t be more proud of this project: It’s got amazing uptempo songs. It’s got huge power ballads on it. It’s got a Chris Stapleton tune; of course, he sang the snot out of it. We have a duet with Lauren Alaina on there, on a song that we wrote; it’s the first song that we’ve had on the record that the three of us have written for a while.”

Get ready to hear Rascal Flatts at their invigorated best LIVE on June 29th – do you have your tickets yet??