Bringing the sunshine to Veterans United Home Loans Amphitheater on Saturday 10th August 2019, Rebelution is on the 2019 Good Vibes Summer Tour! The reggae rock group is touring in promotion of last year's groovetastic Free Reign, and they'll be joined in support by American/Bermudian reggae artist Collie Buddz and DJ Mackle to get you skankin' right! 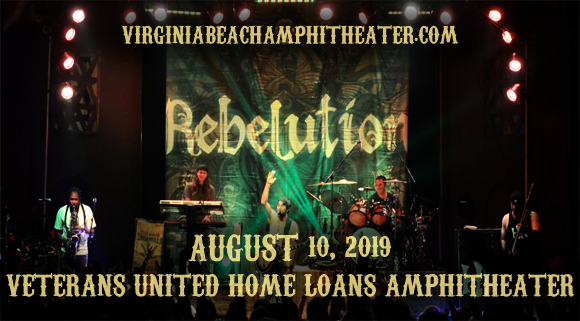 Formed in 2004 in Isla Vista, California, reggae rock band Rebelution consists of Eric Rachmany, Rory Carey, Marley D. Williams, and Wesley Finley. The band met when they were each attending University of California, Santa Barbara, graduating in 2005. They found breakthrough success in 2007 with the release of its debut album, Courage to Grow, which peaked at number four on the Billboard Top Reggae Albums chart. Their popularity continued to grow with the release of their 2009 follow-up, Bright Side of Life, which hit the number one spot on the Top Reggae Albums chart, as did their subsequent releases Peace of Mind (2012) and Count Me In (2014). These albums also debuted at number 13 and number 14, respectively, on the Billboard 200. The band's seventh, and most recent studio album is 2018's Free Rein.