Sam Hunt's new album is finally here, and he's bringing it on the road live with the Southside Tour! Fans have been waiting with baited breath for a new record from the star for the past six years, and now he's returned with a full-length effort that's already given us hits like "Kinfolks," "Sinning With You" and "Hard to Forget!" Not only will fans get a full set of new material from the multi-platinum-selling hitmaker, but he'll be joined with support sets from Kip Moore & Travis Denning, and a DJ set from Brandi Cyrus! All coming to Veterans United Home Loans Amphitheater on Sunday 26th July 2020 – tickets available now! 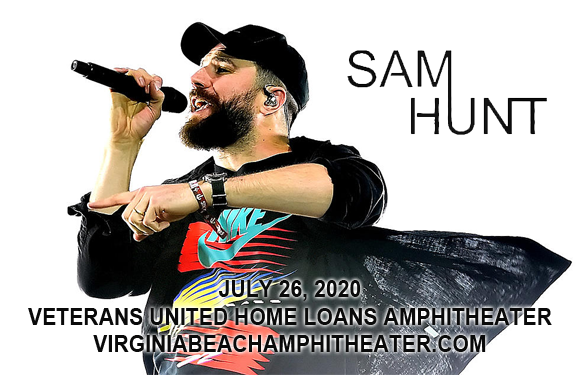 In 2008, Georgia-native Sam Hunt moved to Nashville, Tennessee, in the hopes of becoming a professional musician. The artist spent several years working as a songwriter for artists such as Kenny Chesney, Keith Urban, Billy Currington, and Reba McEntire, before landing a deal of his own in 2013 with MCA Nashville. His debut album, Montevallo, was released the following year, producing a bevvy of hits – “Leave the Night On,” “Take Your Time,” “House Party,” “Break Up in a Small Town” and “Make You Miss Me” – which led to the singer breaking several records. "Leave the Night On", which was the album's lead single, peaked simultaneously on the Hot Country Songs and both the Canadian and US Country Airplay charts, making Hunt the first country artist in 22 years to reach the top of three country charts simultaneously in the Nielsen SoundScan-era. He was also the first newcomer to have a string of three consecutive number one singles on the Hot Country Songs chart and four on the Country Airplay chart. Since then, he has released two live, streaming-only albums with Spotify, and several singles, including his biggest chart hit to date, "Body Like a Back Road," which reached number 6 on the Billboard 200 in 2017. 2020 sees the release of his second studio album, Southside, which is his first full-length release in six years.