Heads up metal fans!! There’s an epic co-headlining tour headed your way!! That’s right, it’s Shinedown and Godsmack on their way to rock the Veterans United Home Loans Amphitheater on Saturday 18th August 2018! Don’t miss out on this awesome show – grab your tickets now, before they go!! 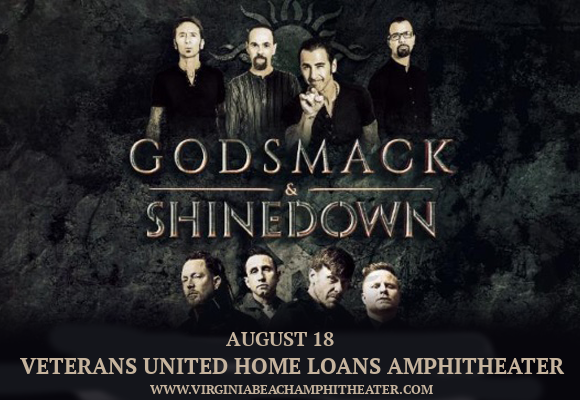 Formed in 2001 by frontman Brent Smith, Shinedown have taken the metal world by storm since their inception with their unique brand of post-grunge rock. With an incredible 11 singles charting at the number one spot of the Billboard Mainstream Rock charts, they hold the record for third-highest band to achieve this feat, behind only Three Days Grace and Van Halen! Godsmack’s sound is also distinctly post-grunge, often drawing comparisons to Alice In Chains, with lashings of nu metal. Their latest album, “1000hp”, was released to a warm reception from audiences and critics alike, described by AllMusic as “Godsmack at their most focused, showing that they've finally found the path back to their roots that they'd been searching for."

Both bands have brand new records in the works, ready for release just in time for the tour. From Godsmack expect “When Legends Rise” on April 27, while Shinedown release “Attention Attention” on May 4 – giving you plenty of time to be note-perfect on all the songs before the show!! So what are you waiting for?? Grab those tickets for Godsmack and Shinedown while they last!