37 years, 12 studio albums, almost 3,000 performances and two Grammy awards, and now Slayer, one of metal's greatest bands of all time, are embarking on their farewell tour! Joined by Lamb of God, Anthrax. Behemoth & Testament, these pioneers of thrash will be descending upon Veterans United Home Loans Amphitheater on Tuesday 12th June 2018 for a bittersweet night of epic music! Don't miss your chance to see these legends live for the very last time! 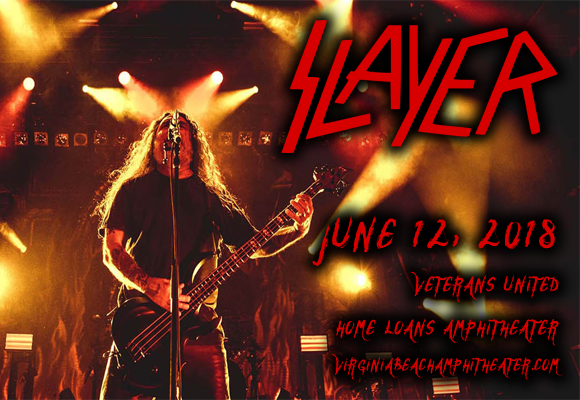 Formed in 1981 by guitarists Kerry King and Jeff Hanneman, Slayer is a heavy metal band and is known as one of the “big four” founding bands of thrash metal, alongside Metallica, Megadeth and Anthrax. The band's self-funded debut album, Show No Mercy, was released in 1983, but it was their third studio album, 1986's Reign In Blood, that honed their sound and set them up as pioneers of the heavy metal sound. The album gained such controversy that it received barely any airplay, but due to widespread underground acclaim the album charted on the Billboard 200 and was certified gold by the RIAA. Since then, three more of Slayer's twelve studio albums have been certified gold, and the band has gone on to become one of the most famous bands in metal music (between 1991 and 2013, the band sold five million albums in the United States), receiving five Grammy Award nominations. 2018 marks the band's final tour, after 37 years in music.