Knotfest comes to Veterans United Home Loans Amphitheater on Wednesday 14th August 2019 and it's gonna be carnage!!! Heavy metal giants Slipknot are bringing their insane roadshow to venues all across North America this summer, tearing up the place with a full headline set, as well as special guest sets from Volbeat, Gojira & Behemoth!

"A Happening That Will Awaken Your Darkest Senses" 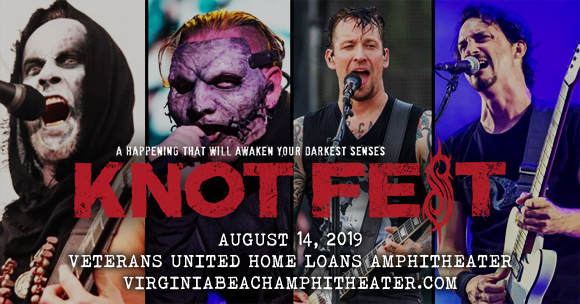 American heavy metal band Slipknot was formed in 1995 in Des Moines, Iowa by percussionist Shawn Crahan, drummer Joey Jordison and bassist Paul Gray. Although the band has experienced several line-up changes since its inception, Slipknot's classic line-up of nine members (Shawn Crahan, Joey Jordison, Paul Gray, Corey Taylor, Mick Thomson, Jim Root, Craig Jones, Sid Wilson, and Chris Fehn) lasted for over a decade, until Gray passed away in 2010. The group made its breakthrough in 1999 with the release of its eponymous debut album and quickly made waves in the heavy metal scene with its aggressive and dramatic live shows and costume of disturbing masks and boiler suits. Their popularity only increased with the release of their follow-up, Iowa, in 2001, and that same year the band received its first Grammy Award nomination for the single "Wait and Bleed". To date, the band has sold 30 million records worldwide, and they have won one Grammy Award (Best Metal Performance for "Before I Forget" from their 2004 album Vol. 3: (The Subliminal Verses)) from 10 nominations.