Everyone who loves quality country music, listen up! The award-winning, multi-million record selling band of Zac Brown is on tour in 2018, coming LIVE to the Veterans United Home Loans Amphitheater on Saturday 15th September 2018! Get your tickets NOW for the Down The Rabbit Hole Tour with the Zac Brown Band before they sell out!! 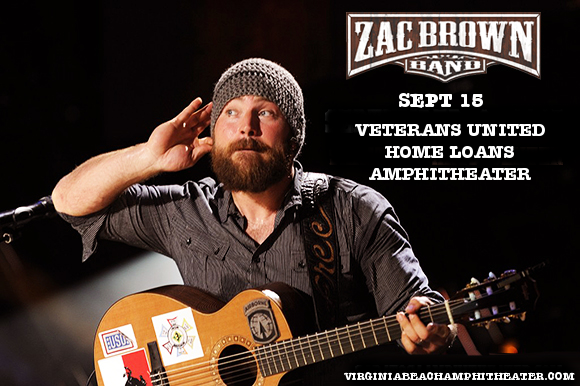 Since 2002, Zac Brown and his crew have been delighting America with some of the biggest country hits ever! With an amazing total of sixteen songs in the charts so far, thirteen of them reached number one!! Several of their albums have achieved platinum certification, and the band have won three Grammy Awards in addition to nominations for many more.

The Zac Brown Band are on tour now with their latest release, “Welcome Home,” released in 2017. “This is the first album we wrote from scratch,” Zac Brown proudly said in a statement. “Every one of these songs was written for this record. It came from my talking with Niko Moon and Ben Simonetti a couple of years ago. We decided to write the most personal record we’d ever written, about the things that matter the most to us, the struggles and the celebrations of life and our relationships with our families… That’s where this began.”

Get ready to hear all the new material from “Welcome Home,” live in addition to all the hits you know and love!! What are you waiting for? Grab your tickets to see the Zac Brown band today!!