Only a fool would never believe this. The Doobie Brothers & Michael McDonald has just dropped the bomb that they're all geared up for "The Reunion Tour". Coinciding with this event is also the band's celebration of their 50th anniversary, which now would be graced by their former lead vocalist and keyboardist. Shrapnels of excitement is spreading throughout their fandom who are now checking out ideal dates and venues, and booking tickets left and right. If you're from this neck of the woods, there's one for you over here as The Doobie Brothers & Michael McDonald are scheduled to mount the Veterans United Home Loans Amphitheater stage on Tuesday 23rd June 2020. Tickets? We've got you covered! Start clicking the 'buy tickets' button on this website to save your seat and lock-in this opportunity to experience this amazing show. 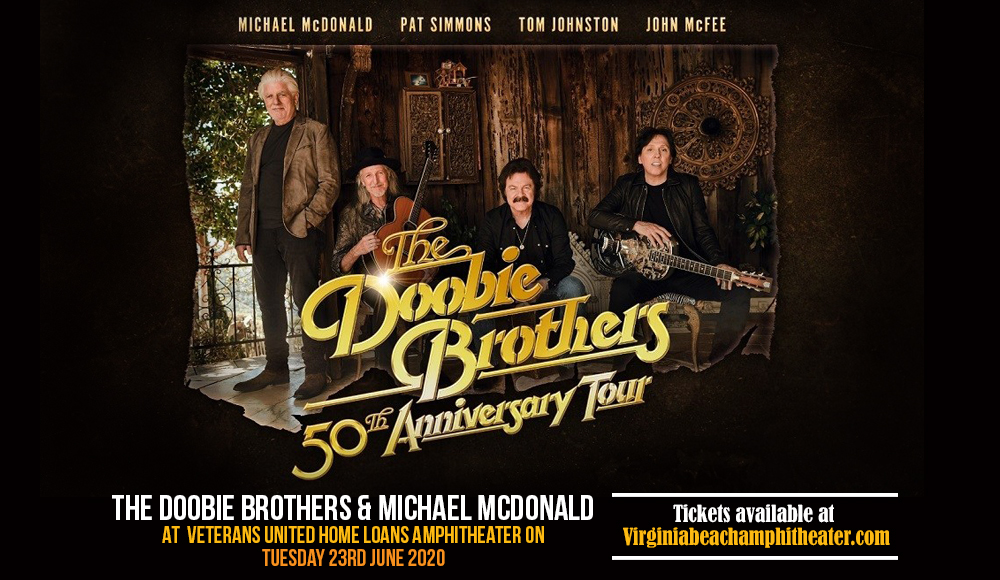 These days, it just takes a social media or an Instagram post to announce a big event. But the Doobie Brothers may have done it 'old-school' by segueing it in one of their concerts song numbers. After a sing-along jam vocalist Simmons quipped: “You might remember him from, well, he has his own band these days,” he said. “But you might remember him from his band, the Doobie Brothers — Mr. Michael McDonald.” After McDonald's number, which elicited rousing cheers from the crowd, Simmons stepped-in to add: “Hey, this sounds pretty good,” he told the crowd. “Maybe we should take this on the road next year.”

That started the ball rolling . From there, the Doobies have officially announced a 50th-anniversary arena tour that will take them to 30 North American cities in 2020. “We’re truly excited about our 50th Anniversary Tour, as it’s a celebration of the band’s entire history,” lead guitarist and vocalist Tom Johnston said in a statement. “We’ll be performing songs from our full catalog, as well as new music.” Former frontman Michael McDonald shared his sentiment, saying, “With the Doobies, everybody in the band was proud to be a Doobie Brother…And to this day, I think of myself as a Doobie Brother — all these years later.”

This coming together of two of the most formidable forces that shaped the blue-eyed soul sound is such a welcome treat for fans who have longed for this day to come to pass. The thought of basking oneself in the live strains of their amazing string of hits is definitely something to look forward to –"Listen to the Music", "Jesus Is Just Alright", "Long Train Runnin', "China Grove", "Black Water", "Take Me in Your Arms (Rock Me)", "Takin' It to the Streets", "It Keeps You Runnin'", "Little Darlin' (I Need You)", "Echoes of Love", "What a Fool Believes", "Minute by Minute", "Real Love", "Wynken, Blynken & Nod", "You Belong to Me", "The Doctor", "Dangerous", and many more!

What a load of fun! You definitely want to be part of that crowd singing your heart and lungs out to all the hits. What'ya waiting for? Lock and load your tickets now!