Chart-topping rockers Breaking Benjamin are headed to Veterans United Home Loans Amphitheater on Wednesday 21st August 2019! The radio-wave dominating group are touring in promotion of last year's sixth studio album, Ember, and will be joined in support by Chevelle and Three Days Grace!

“We are excited to drink and rock on a huge tour with Breaking Benjamin this summer,” Chevelle said in a collective statement. “Big venues and lots of next level shenanigans. Can’t wait to melt faces!” 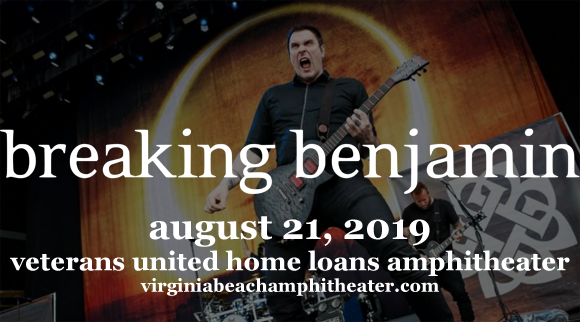 Formed in Wilkes-Barre, Pennsylvania in 1999, American rock band Breaking Benjamin has sold more than 7 million units throughout its career, and has released three RIAA-certified platinum records. The band has also released two gold records, and several certified singles, including two multi-platinum, two platinum, and five gold. The group made its major-label debut in 2002 with Saturate, but it was their 2003 follow-up, We Are Not Alone, that brought them mainstream attention, peaking at number 20 on the Billboard 200. The band's most successful album to date is Dark Before Dawn (2015), which debuted at number one on the Billboard 200. Their sixth, and most recent, album is 2018's Ember.