Are you ready to see some chart-topping, award-winning hip-hop performed live at the Veterans United Home Loan Amphitheater? Then look no further, because CHANCE THE RAPPER is coming to take over the stage on Saturday the 3rd of June!! Tickets are going to disappear fast for this, so be equally speedy in grabbing yours – click the “Buy Tickets,” button above while there’s still time!! 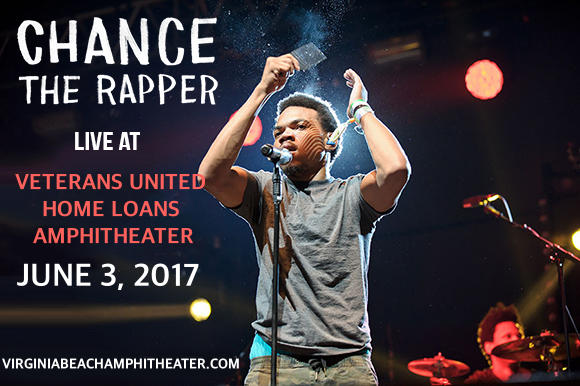 Born and raised in Illinois on Chicago’s South Side, Chancelor Jonathan Bennett’s early influences were diverse, including jazz and soul before he purchased Kanye West’s album “The College Dropout” as a child and went on to form a hip-hop duo in his first of high school. His teachers, however, put down his musical ambitions. During a 10-day suspension in his senior year, he used the time well, recording his first full-length mixtape “10 Day,” which he published in December 2012, and it was downloaded over 30,000 time through Datpiff, grabbing the attention of the media and producers alike.

The rest is history – Bennett has now won 3 Grammys for his latest release “Coloring Book,” in 2016, which not only streamed over 57.3 million times in just its first week or release, but has broken records for being the first streaming-only album to chart AND the first to receive a Grammy nomination and award!! He’ll be wowing audiences live now on his Magnificent Coloring Tour, hitting over 36 cities across the US. Make sure you’re there to see it – it’s going to be amazing!!