Two greats of classic rock join forces this summer for an unforgettable tour that will blow your mind! Acclaimed chart-topping giants Chicago & REO Speedwagon will be performing two headlining sets at Veterans United Home Loans Amphitheater on Wednesday 18th July 2018, with REO Speedwagon thrilling fans with a setlist of hits like "Can't Fight This Feeling", and Chicago playing the whole of their 1970 self-titled album! It's going to be huge! 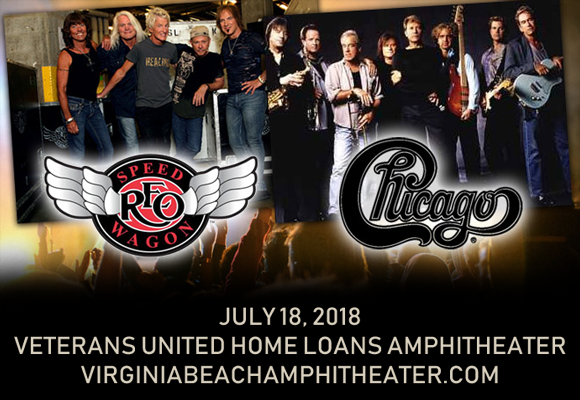 American rock band REO Speedwagon formed in 1967 in Champaign, Illinois, and released their self-titled debut album in 1971, after signing with Epic Records. The band had several hit albums throughout the 1970s, including the platinum-certified Live: You Get What You Pay For (1977) and the double-platinum-selling You Can Tune a Piano but You Can't Tuna Fish (1978). 1980's Hi Fidelity, which remains the band's biggest success with over ten million copies sold, was marked by a more pop-oriented feel and launched four US Top 40 hit singles. Altogether, the band has sold over 40 million records and has charted thirteen Top 40 hits.