EVENT POSTPONED (date TBA). Hold on to your tickets! They will be valid for the new date once announced.

One of country music's most popular touring acts (he won the Billboard Touring Award for Top Package Tour five years in a row), Kenny Chesney comes to Veterans United Home Loans Amphitheater on Wednesday 17th June 2020 on his Chillaxification Tour! The eight-time Entertainer of the Year is known for his massively entertaining live shows that combine his slick, flawless performance with his hit-filled back catalog, guaranteeing a good time for fans! Not only that but the top-selling artist will be joined by Michael Franti and Spearhead in support!

"It’s been a year, so when I get out there, I wanna make sure that No Shoes Nation is being rocked, having fun and getting all the music they can out of the day," said Chesney in a press release. “As crazy and awesome as the stadium shows are — and there’s nothing like them — there is a vibe to the amphitheater shows that only happens in those places. You look out at the lawn, you see everybody coming together, singing the songs — and it’s this community that feels so close.” 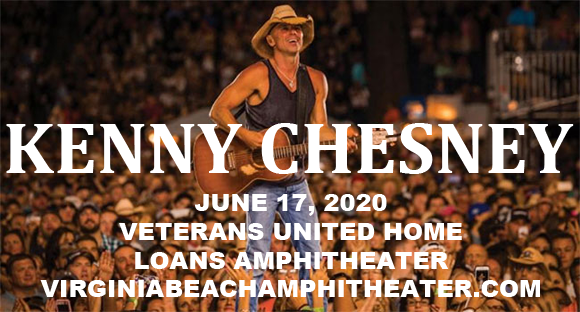 One of the most successful country crossover artists of all time, Kenny Chesney began his career in 1994 when he released his debut album, In My Wildest Dreams. To date, the singer, songwriter and record producer has released 20 studio albums, which have all been certified gold or higher by the RIAA, and has sold over 30 million albums worldwide. In addition, 10 of his albums consecutively reached number one on the US Billboard Top Country Albums chart. He has also charted more than 40 top-ten singles on the U.S. Billboard Hot Country Songs and Country Airplay charts, including 30 that have hit the top spot, and 26 of his singles have reached the top 40 of the Billboard Hot 100. Chesney is also a best-selling live act, and has been highly-awarded throughout his career with both the Country Music Association and the Academy of Country Music awarding him Entertainer of the Year for four consective years. To date, he has received six Academy of Country Music awards and nine awards from the Country Music Association, among others. Chesney's 2007 Flip-Flop Summer Tour was the highest-grossing country road trip of the year. His most recent release is 2018's Songs for the Saints.