Maxwell is coming LIVE to Veterans United Home Loans Amphitheater on Saturday 27th May 2017!
That's right, the rumours have been confirmed true, Maxwell will be embarking on a North American tour early this summer to bring fans an experience they will never forget! Catch all of your favorite songs as Maxwell performs his soulful classics right at Virginia Beach… tickets are on sale right NOW – but you best be quick – as previous years have proven, these are bound to sell out fast! 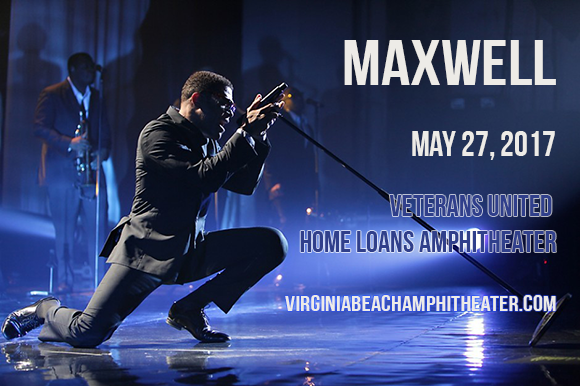 Maxwell hardly needs an introduction as one of the biggest male vocalists on the R&B/Pop scene since his debut back in the mid 1990's. For his groundbreaking collection of music, Maxwell is often referred to as the King of modern soul. If you're a fan of his incredible songs then whatever you do – don't miss your chance to catch him LIVE in the summer of '17 for a sell out performance!

"The 43-year-old neo-soul pioneer complements perfectly. A loverman persona is enlightened enough to accommodate a dramatic cover of his longtime favourite Kate Bush song, This Woman’s Work. Falsetto primed and dark suit immaculate, he sails through what fans want to hear and plenty of percolating funk from his 1996 debut album, Urban Hang Suite."