Bridging the gap between reggae, rock, surf music and jam band stylings, Rebelution are a huge name on the touring circuit, and they're headed to Veterans United Home Loans Amphitheater on Saturday 2nd October 2021 (Rescheduled from Saturday 27th June 2020) on their Good Vibes Summer Tour! The Grammy-nominated gang make soul-warming tunes that are impossible not to dance to, and their musicianship is second-to-none, making them a must-see live act! Joining the laid-back quartet will be UK roots reggae band Steel Pulse, dub-heavy Hawaiian reggae band The Green, Jamaican singer-songwriter Keznamdi and their very own DJ Mackle in support! 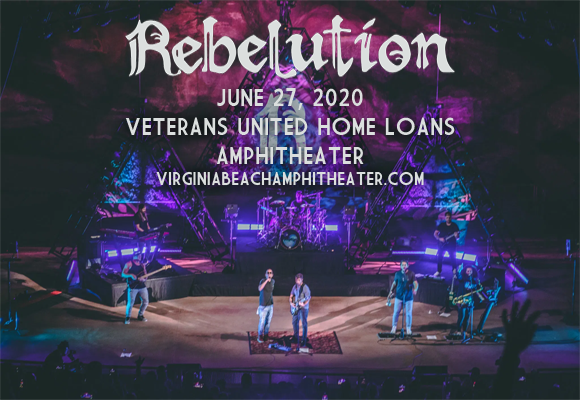 Formed in 2004 by college friends Eric Rachmany, Rory Carey, Marley D. Williams and Wesley Finley, whilst they were studying at the University of California, Santa Barbara, Rebelution is now one of the most popular reggae acts in the US. The band originally made their way performing at local venues and touring, steadily building a large and loyal fanbase. And they released their self-titled debut EP in 2006. The following year, they had their big break with the release of their debut album, Courage to Grow, and its lead single "Safe and Sound", which dominated the airwaves at a variety of radio stations, including San Diego's 91X and Los Angeles's KROQ. The album peaked at number four on the Billboard Top Reggae Albums chart, and by the end of the year, it was picked as the iTunes Editor's Choice for Best Reggae Album of 2007. The band has released seven studio albums to date, with all six of its subsequent LPs hitting number one on the Billboard Top Reggae Albums chart. They were also honored with Billboard's Reggae Album of the Year in 2014 for the album Count Me In, and their 2016 album Falling Into Place was nominated for a Grammy Award for Best Reggae Album in 2017. Rebelution's seventh studio album and most recent release is Free Rein (2018).