There are just a handful of really hardworking rock artists around, and that list definitely includes these hard-rockin' legends Sammy Hagar and the Circle & Whitesnake. Once again their touring machine is well oil and revving up for a high-octane tour to that would take them around the country and some parts of the world. One of the major venues tagged on this tour de force is Veterans United Home Loans Amphitheater, where Sammy Hagar and the Circle & Whitesnake are set to rock the live concert stage on Saturday 18th July 2020. This side of town will see red and get lethal doses of hard rock-metal as the Red Rocker and this venomous pit of vipers are shaking the ground real soon. Book your tickets now! 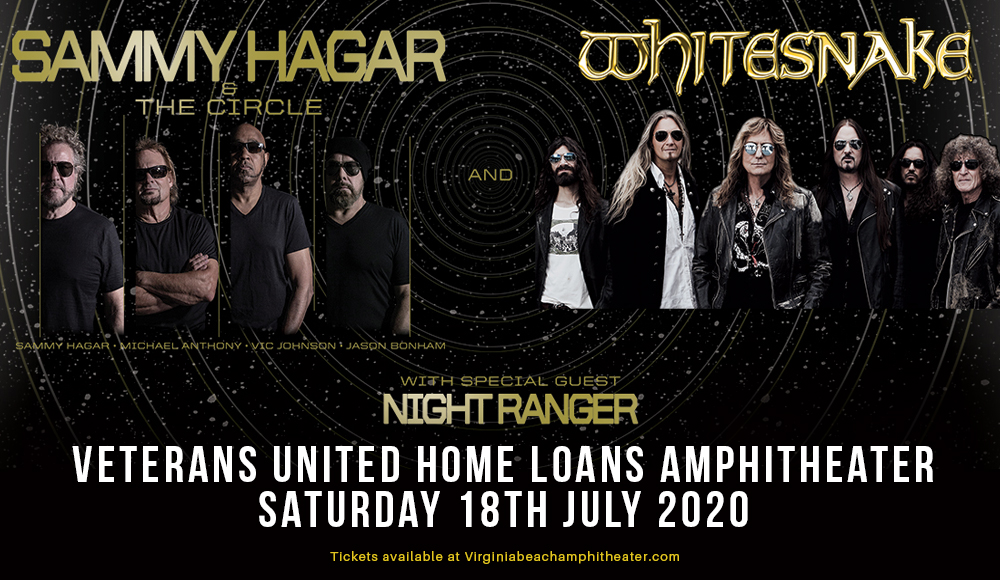 Popularly known by his moniker the Red Rocker, Sammy Hagar has a double-edged career as a solo artist and as lead singer of the band Van Halen. His trademark scratchy vocals and his rough and ready showmanship earned him legions of followers. His classic hits include "Eagles Fly," "I Can't Drive 55," "Your Love is Driving Me Crazy" and "I've Done Everything for You." On March 12, 2007, Hagar was inducted into the Rock and Roll Hall of Fame as a member of Van Halen. His is definitely one of the well-respected veteran rockers with an enduring career of more than four decades; and yes, there are no signs of him slowing down.

Combine hard, blues rock with heavy and glam metal. Whitesnake has mixed all those into a lethal concoction that leaves a venomous sting. Whitesnake's 1987 self-titled album was their most commercially successful worldwide, and contained two major US hits, "Here I Go Again" and "Is This Love", reaching number one and two on the Billboard Hot 100. The album went 8 times platinum in the US. The band split in the early 90s, but officially reunited and regrouped in 2002, and had been touring since. In 2005, VH1 listed Whitesnake at number 85 as one of the greatest hard rock bands of all time.

As both bands officially announced their joint – double-headliner tour, the vibe of excitement can definitely be felt from both camps.

“I love some friendly competition on stage and that’s exactly what this is going to be,” said Sammy Hagar. “David and I have nothing but the highest respect for one another, but we would also like to blow the other guy off the stage! Add in Night Ranger and the fans will have one hell of a night of music.”

“The Red Rocker & The Snake??? OMG…I wanna see that show myself!!!,” said David Coverdale of Whitesnake. “I’m a big fan of Sammy Hagar, Michael, Vic & Jason…We’re gonna have a blast together !! See Y’All There, People!!!”

This is your chance to scratch this off your rock-concert bucket list. Book your tickets now!