Having recently finished The Owl Tour, Zac Brown Band is back on the road this summer, coming to Veterans United Home Loans Amphitheater on Thursday 4th June 2020! This time, the multi-platinum-selling, Grammy Award-winning Southern rock country crossover group are doing something a little different… The band have dubbed this stint the Roar With The Lions Tour, and it'll be a show that allows the performers to draw from their varied and beloved back catalog, as well as perform newer songs and a covers from any number of musical genres, to curate and create a one-of-a-kind experience that fans will love! Get ready to go wild and Roar With The Lions! 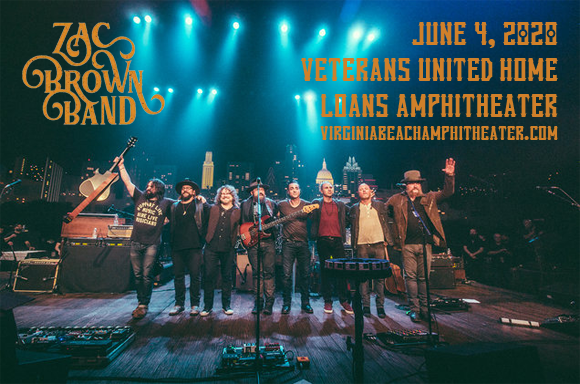 Zac Brown Band is a group that has truly paid its dues on the way to worldwide fame. Started as a solo project by frontman Zac Brown in 2002, the band began to form as friends and fellow musicians joined him over time as he played show after show – sometimes over 200 a year. This collaborative atmosphere that the group created, and its dedication to performing live, finally paid off in 2008 when their major-label debut single "Chicken Fried" became a number one hit and five-times platinum-selling single, leading to their major-label debut album The Foundation also selling five-times platinum. To date, the band has released six studio albums, and has charted 16 singles, including 13 number ones. In 2019, Zac Brown Band released its latest album, The Owl.