Quite simply one of the world's most famous and talented songwriters, Bob Dylan comes to Veterans United Home Loans Amphitheater on Sunday 5th July 2020! The foremost artist of the 1960s protest song movement, Dylan has had a rich and varied career full of hits to draw from and will be performing a mighty headline set as part of his Never Ending Tour! The multi-award-winning performer will be joined by the perfect combination of support acts – bluesy Americana group Nathaniel Rateliff and The Night Sweats & previous tour-mates The Hot Club of Cowtown! 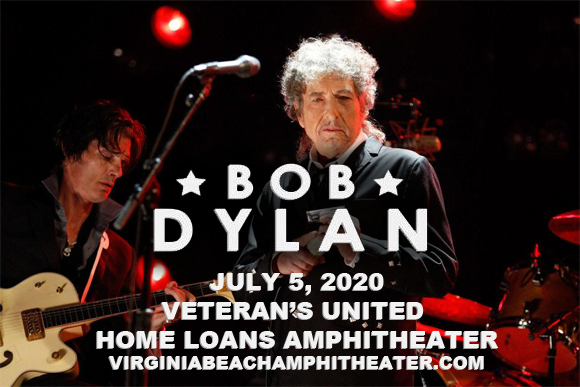 Bob Dylan changed the face of music in the 1960s – his intellectual, poetic lyricism was a far cry from the romance-themed rock and roll music of the 1950s and represented a turning of the tides with the youth of the day, who were inspired by his anti-war, anti-establishment themes that he portrayed in his songs. Inspired by folk artists like Woody Guthrie, Dylan rose to fame in the early-1960s with protest songs like "Blowin' in the Wind" and "The Times They Are a-Changin'", and went on to have huge success within rock music with songs like the highly-influential, six-minute single "Like a Rolling Stone" (1965). Today, he has sold over 100 million records worldwide, making him one of the world's best-selling artists of all-time. He is an inductee of the Rock and Roll Hall of Fame, Nashville Songwriters Hall of Fame and the Songwriters Hall of Fame, and has been awarded both a Pulitzer Prize and the Nobel Prize in Literature. Throughout his career, he has also been awarded the Presidential Medal of Freedom, 10 Grammy Awards, a Golden Globe Award, and an Academy Award.